skip to main | skip to sidebar

We Are Back In League

After a very long time I went for a training to my so-called domestical forest "The Small Castle." But of course I did not attend Standard training of my club but another edition of O-league. To be honest in 2016 when the place of my daily duties moved to the metro line "C" I had expected that I would attend running trainings more often... And the reality - I have not been there for a single run or football since then.

So today it was nothing special as I went for a special training held my Mr Freeze. It was very interesting but not good for my mental power in the beginning as I first found the false control number 34. Then I failed to find the control number 33. But later I gained some self-confidence with more and more bunches of controls to came along.

In the end I think I made quite a good performance which was highlighted by beating Rye the Breadman with 34 second margin!

That means noone is allowed to beat me in my Castle.

Declared by His Majesty.cz at 6:53 PM No comments:
Location: Hradek, Czechia

The First Week of May - The Time of O-love

Another week passed by with so many orienteering event and so little time to write at least something stopid about all of it. There were two official events and two unofficial so I will go back in time and try to write something about each of them briefly. Just notice the report is written retrospectively.

I run a longly run
The only one that I have ever could
Don't know where it goes
But it's crap to me, and I run along
I run this homeless field
On the Theatre of Broken Dreams
Where vagabonds sleeps
And I'm the only one, and I run along

My compass's the only one that runs beside me
My hollow head's the only thing that's sucking
Sometimes, I wish someone out there will find me
'Til then, I run along

I'm running down the path
That divides me somewhere in my map
On the contourline
Of the edge, and where I run along
Read between the paths
What's fucked up, and everything's alright
Check my vital signs
To know I'm still alive, and I run along

Declared by His Majesty.cz at 10:22 PM No comments:
Location: Park of Guts, Czechia

A brand new geocache by Velicenstvo.com has been published lately. The cache is dedicated to famous Czech athlete Ondřej Vesecký - the European champion at 1.500 meters and the fair play hero of Prague World Championship for his fabulous move to not finish the race but rather help Finnish opponent at the final event of Marathon race.

So if you want to recall this famous man and truly sportman with big heart and stubborn mind then just solve the easy quiz and go to the solved coordinates. 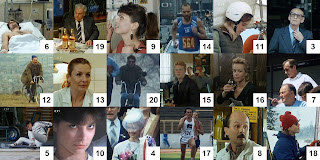 Declared by His Majesty.cz at 8:59 PM No comments:
Location: Long Mile, Czechia

Veličenstvo Unlimited: Break It, Break It!

The Fatal Break of Floorball Stick

In the end of January I got the Chinese flu so I skipped two weeks of all physical activity including floorball Monday league with my colleagues. When I had recovered I got a special Valentine's day gift - a bodycheck in the wall when I hit it with my head while falling hardly with my knee on the floor. That resulted I was not able to walk the other day and I had to rest for more than another week... So this Monday I overcame my fears and went for a play of florball after almost two months. Hopefully no part of my body got damaged this time. But I see some serious evidence I should give up this sport forever and rather stick to drink beer. 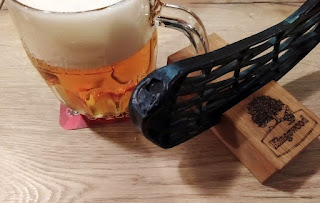 The Great Break of Motol Rift

On Tuesday I came back to my sport number one. Number one does not mean that I am good at it, just I do it the most. Another O-league was about to take place at one of the most windy place in Prague. What a great choice by Mr Frost but sadly for him he must wait there in cold the whole time. I tried to run but I was still slower than the relicts of dead snails you can see in my map. 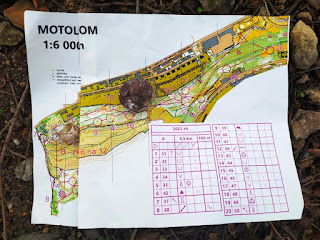 Otherwise it was very interesting event. This map is like a box of chocolate - you never know where the control will be:

1. You see a black point in the map and you suppose it is going to be a stone? ... No, it is a concrete structure!

2. You see a black triangle in the map and you suppose it is going to be a heap of stones? ... No, it is a heap of railway sleepers!

The Tiny Break of the Rules

Another day came and there was another activity for me which was the second round of DSSS that took place in the Orchards of Herald and surronding quarters of Hillsville and Wineyards. The map was very tricky with full of cockroaches so that many competitors were disqualified because of running through them. Just look in the map if you can see them all.

Some competitors also missed to "punch" one of the controls and I do not want to sound cocky, but I avoided all of these mistakes. But unluckily near the end I became eliminated too. I thought I would run along the stairs but a wall came in my way so I jumped to the stairway. Well I could go back that about seven meters and everything would be fair, but my race time was already so bad that I saw it better to finish with the same results as some other big fishes of orienteering like Mr Frost, Illman, Timberin, Paul, Joachim von Räsenchin or John Coat and many others.

Declared by His Majesty.cz at 10:01 AM No comments:
Location: Vypich, Czechia

I know the title of this article sound cool but it is complete bullshit because I really didn't compete in any type of event last Summer. Anyway when there is a chance to undergo some sprint practice then why not to participate. So on Wednesday I went for the first race of Dragoon Sprints Spring Series (DSSS - please not to be confused with Workers Social Justice Party) organized by Mr. Groove. Well it's meant for dragoons, cavalry or maybe some horsemen but luckily even fat slow and dumb war elephants can take part. So did I but even I was running too slow still I wasn't able to make precious route-choices. So maybe next time at another training. I know this weekend is the Prague Championship race in sprint - but for sure I give up in advance...

On the last day of March I crossed the Volga river to compete in another edition of Freezer's O'league. The weather was freezing like in Russian movie so I better run before being denazificated. Although I am a noble monarchist but when visiting the East you never know.

The race was nice, sometimes in forest and so long. Even that long that I can't even upload the whole map here because I don't want to exceed the capacity of my storage. You know times are bad and even the amount of Royal gigabytes isn't unlimited. 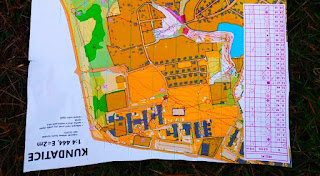 The crucial moment of my run came between checkpoints six and seven. I decided to go over the hill along the wall but suddenly I found myself literally between fences! Am I crazy? Luckily not yet too much but almost too fat to get through a hole in a wire mesh fence. But with the help of lion power I managed to escaped from this trap with some rests of mental power as well. 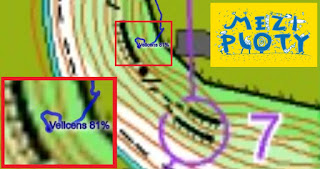 The course then led around Šeberák Pond which I tought is famous for Dead Dogs but that's not all. It is also very popular among nudists and some guys for something else I learnt later in my Palace. So at the end of the day I was happy that the weather was so fucking cold because recently I am not that fast to prevent my ass from some crusing. Even it is only a pond there I guess it might cause me seasick... 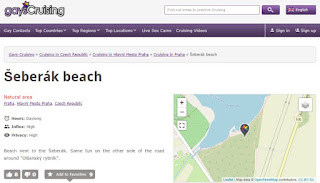 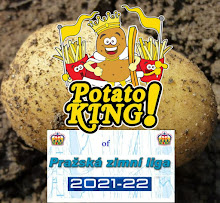 The number of envoys at the Royal Court 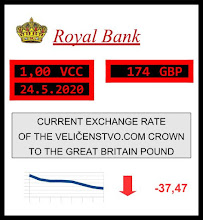 Outside the Blog Regia 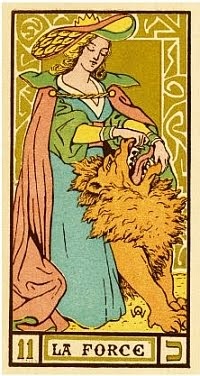